The moment you hear 9/11, what strikes your mind?

Yes, most of us, even today, vividly remember the imageries of dreadful terror attacks on America. 9/11 is symbolic to a brutal launch of terrorism on an international scale.

But today, I would like to sway your attention towards a positive global event – the introduction of Vedanta & Yoga to the world ignorant of India’s heritage & spiritual prowess, i.e. the launch of Hinduism on an international level.

Interestingly, this historic day was 9/11, when the World Parliament of Religions of 1893 took off in Chicago and Swami Vivekananda, a young chap in his twenties, stepped onto the world stage and presented Hinduism, the mother of all religions with a tint of nationalist flavour & left the audience spellbound.

I wish we remember 9/11 for what Vivekananda offered to us, than what an act of terror & hatred gave us. 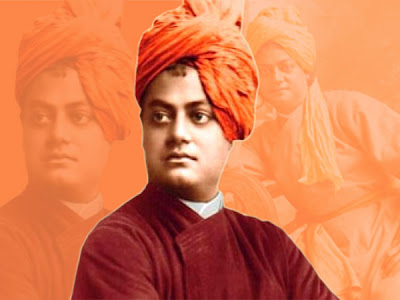 My introduction to Swami ji was through a book published by Advait Ashram, titled “What Religion is..” As a teen, I had a deep desire to develop my own thought process before starting to delve into ideologies & philosophies that might influence my thinking. Those were times when I was reluctant to read Mein Kampf or The Experiments with Truth even though having a deep interest in Gandhi & Hitler. Similarly, cautious not to get influenced by Swami Vivekananda as well, I avoided reading any in-house publication of Ram Krishna Ashram, which I thought might be unjustly deifying Vivekananda.

I made lots of effort in ensuring that no personality ever overpowers or dictates my individual conviction but it all went in vane. Today, I admit that Swami Vivekananda has had an everlasting impact in shaping my persona. In the divine influence of Vivekananda, I found all the answers to my inherent childish addiction of questioning every damn thing.

Narendra Nath Datta, as was Swami ji earlier known, was a convent educated Sannyasi in British India! That, in itself, would interest many of us. In fact, he had a profound impact on the leaders of his era, encompassing people from all creed of life.

Before moving ahead, lets observe his contemporaries during the period of Vivekananda’s active life. Mahatma Gandhi was in his youth pursuing his law to fulfil the family dream of becoming a Barrister someday. The liberal & skilful Lord Dufferin was India’s Viceroy. Indian National Congress was slowly developing into a threat to the British rule. Nehru was enjoying his privileged childhood playing in the lawns of Anand bhavan. The Swadeshi movement was about to get wings under the militant leadership of Lokmanya Tilak. Prof Jagdish Chandra Bose was working on his invention, the Crescograph, to measure plant response to various stimuli. Rabindra Nath Tagore was in his most literary productive Sadhna period. These are people who impacted social public life in India, enough to make you understand the times Vivekananda lived in & the overarching influence he had over his contemporaries.

In 1888, after taking monastic vows, Vivekananda travelled extensively all across India in his ascetic saffron robe without any belongings. His only possession were a Kamandal, a Bhagvad Gita & The Imitation of Christ. He mostly moved on foot & at times with train tickets bought by his disciples.

After covering the whole of India, from Himalayas to Deccans to Gangetic plains to Rajputana, Swami ji reached Kanyakumari in the last leg of his tour. Meditating on a rock, now known as the Vivekananda Rock Memorial, in the southern most tip of India, the monk reflected upon his visits & contemplated that India as a nation had lost its individuality.

In those days, it was highly unexpected of a saint to conceptualise the notion of a nation. And throughout his stint at the parliament of religions, this burning nationalism was the undertone of all his speeches. There were bishops, noted priests, saints & representatives of many faiths but none other than him talked of a demography. Yes, along with Hinduism, the flag of India was also held high by Swami Vivekananda. He represented India, at a time when the concept of a unified nation was still to take a concrete shape.

The Chicago Parliament of Religions was a part of the World’s Columbian Exposition, a humongous event commemorating 400 years of the discovery of America by Columbus. The objective of which was to showcase human progress since the so-called “discovery.” Some of the attractions of this international fair were Electric Lights, the first Ferris wheel and an Internal Combustion Engine, which Henry Ford saw thereby getting the idea of the first ever Horse-less carriage (the modern Car).

For the Parliament of Religions, delegates & representatives of various faiths were invited. But Vivekananda had reached Chicago without a formal invitation, simply upon requests & funds raised by his fellow disciples. Upon reaching there, he also came to know that only people with credentials could get an entry to the parliament. This was when a Harvard University professor met Vivekananda and had said of him after spending some time with the monk, “To ask you for credentials is like asking the sun if it has the right to shine.” Prof John Henry Wright then wrote a letter of recommendation to the authorities and Swami Vivekananda, an orator of exceptional talent was allowed an entry as a speaker representing Hinduism. The rest is a legend!

Vivekananda was not just a representative of Hinduism, he was a flag-bearer of humanity, a professor of tolerance, a man of magnetic personality & a spokesperson of Indian spiritualism. Paradoxically, we desire to live & live long to make a mark in that very world where Swami Vivekananda, in a life span of just 39 years, left his indelible footprints for generations to follow. He accomplished his task and went into samadhi at an age when our leaders call themselves “youth.” Inarguably, the world cannot have a better Youth Icon than Swami Vivekananda.

Today, the 12th of January is the National Youth Day and Swami ji’s 160th birth anniversary. Let us all cherish the fact that our world has had the privilege to witness a legend like Vivekananda. Arise..!!